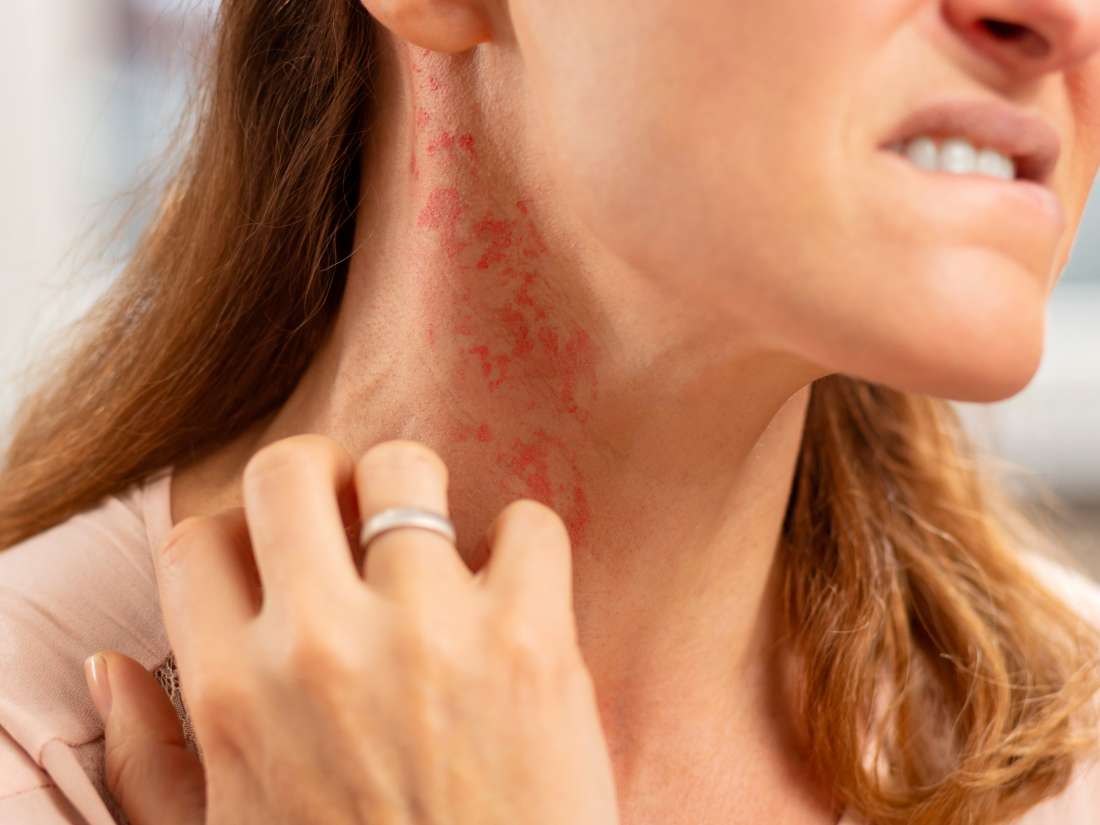 A rash is a change in the skin that can result in bumpy, blotchy, or scaly patches. Many people have had an itchy rash at some point in their lives. Many are harmless and will go away on their own, but others may be more persistent due to underlying causes or conditions.

Many different factors can cause an itchy rash, including:

Sometimes, an itchy rash will improve without complicated treatment or prescription medication. However, a rash can be an early indication or warning sign of a more serious long-term health concern, which a person should address.

It is important to take itchy rashes seriously, particularly if they are long lasting and of unknown origin. Here are eight of the more common examples of itchy rashes.

A range of everyday products and plants from rubber gloves to poison ivy contain different allergies that can cause an itchy rash in people who are sensitive to them.

Symptoms can develop within a day or two after exposure but may take weeks to go away.

Severe forms, including a rash on the face or an uncomfortable rash that will not go away, may require prescription topical or oral steroids. Avoiding known triggers is the best way to prevent future episodes.

Many doctors and skin specialists consider psoriasis to be an autoimmune inflammatory disorder that disrupts the normal cycle of skin cells. A haywire immune system causes white blood cells to wreak havoc in the skin, resulting in red, raised, scaly plaques.

Around 2% of people living in the United States have psoriasis. It is a genetic disease that runs in families, so it is not contagious. This means that a person cannot contract psoriasis from coming into contact with someone who has it.

The location and appearance of plaques depend on the type of psoriasis.

With plaque psoriasis, which affects 90% of people with psoriasis, pink or red plaques develop in symmetrical patterns on the elbows, knees, and near the hairline. These plaques usually have a layer of white dead skin cells.

More severe forms of psoriasis, such as erythrodermic psoriasis, which affects a large portion of the body, or pustular psoriasis, which causes pus-filled blisters, are less common. Psoriasis can also cause pitting and other damage to fingernails and toenails.

In addition to the physical and social discomfort that an itchy psoriasis rash can cause, it can also lead to other complications, including psoriatic arthritis. This affects up to 30% of people with psoriasis and carries an increased risk for cardiovascular disease, diabetes, inflammatory bowel disease, and metabolic syndrome.

Treatment depends on the severity of an individual’s psoriasis. Options range from topical skin treatments to light therapy to systemic medications that target the immune system.

Hives, or urticaria, are a kind of itchy rash triggered by the body’s release of histamine in response to:

The American College of Allergy, Asthma, & Immunology report that roughly 20% of people will experience hives at some point in their lives.

In most cases, hives get better within a few days. However, some people have hives for months at a time.

Allergies rarely cause these long lasting or chronic cases of hives. Antihistamines can usually control itching and discomfort in acute cases.

Learn more about how to treat hives here.

Heat rash does not usually require treatment and goes away on its own, particularly when the person with the rash moves to a cooler area.

Some other conditions can also cause an itchy rash. Some common examples include:

The primary symptom of chickenpox is a rash that develops into itchy, fluid-filled blisters. These will eventually scab over. Chickenpox is highly contagious, so individuals with the condition must avoid contact with others until no new blisters form, and all of the old blisters have scabbed over. Antihistamines and lukewarm oatmeal baths can help control the itching.

A very contagious virus causes measles. It typically results in a brownish blotchy rash, but other symptoms may develop before the rash appears. These include fever, white spots inside the mouth, and a runny nose.

As the name suggests, hand, foot, and mouth disease can cause an itchy or painful rash on the hands or feet or both. It is most common in children under 5 years old.

It is a contagious virus that can spread through nose and throat secretions, feces, or scabs and blisters.

Aside from a rash, other symptoms include fever, sore throat, and mouth sores.

Bedbugs, which are roughly the size of poppy seeds, can cause very visible and itchy welts and rashes.

People who are highly sensitive or allergic to bed bugs may need antihistamines to reduce the itching.

It usually takes professionals to remove bed bugs. However, some of these methods may help.

The scabies mite, which is invisible to the naked eye, can also cause an itchy rash. A person can develop scabies after direct contact with a person who has the condition, or through contact with infected objects. Scabies is readily treated but requires prescription medication.

Infections can cause an itchy rash on different parts of the body.

Ringworm is a fungal infection that causes a circular, red, or brown itchy rash with a thicker edge.

Athlete’s foot is ringworm that develops on a person’s foot. However, it can spread from one body part to another.

Effective treatment for an itchy rash depends on the cause.

Some rashes, such as those due to poison ivy, will go away on their own. Others, such as psoriasis, tend to be a lifelong condition.

There are many reasons why a person may have an itchy rash. It may be a side effect of a more severe underlying condition. A person should see a doctor if they are concerned about the cause of their rash.

Individuals with long lasting or unexplained rashes should see a doctor for symptom relief.

It is possible to manage most rashes, including those caused by more serious medical conditions, with medical treatment.